A Jody O’Neill and Abbey Theatre co-production, in association with The Everyman and Mermaid County Wicklow Arts Centre

What I (Don’t) Know About Autism

A New Play By Jody O’Neill · Directed By Dónal Gallagher

Premiered in February 2020 in co-production with the Abbey Theatre and in association with Mermaid County Wicklow Arts Centre and The Everyman. Funded by the Arts Council.

A smart, funny and utterly enjoyable night of theatre that enlightens as it entertains.

A riveting celebration of difference.
It is also, perhaps more importantly, a timely political gesture.

This is an uplifting, powerful piece of theatre. 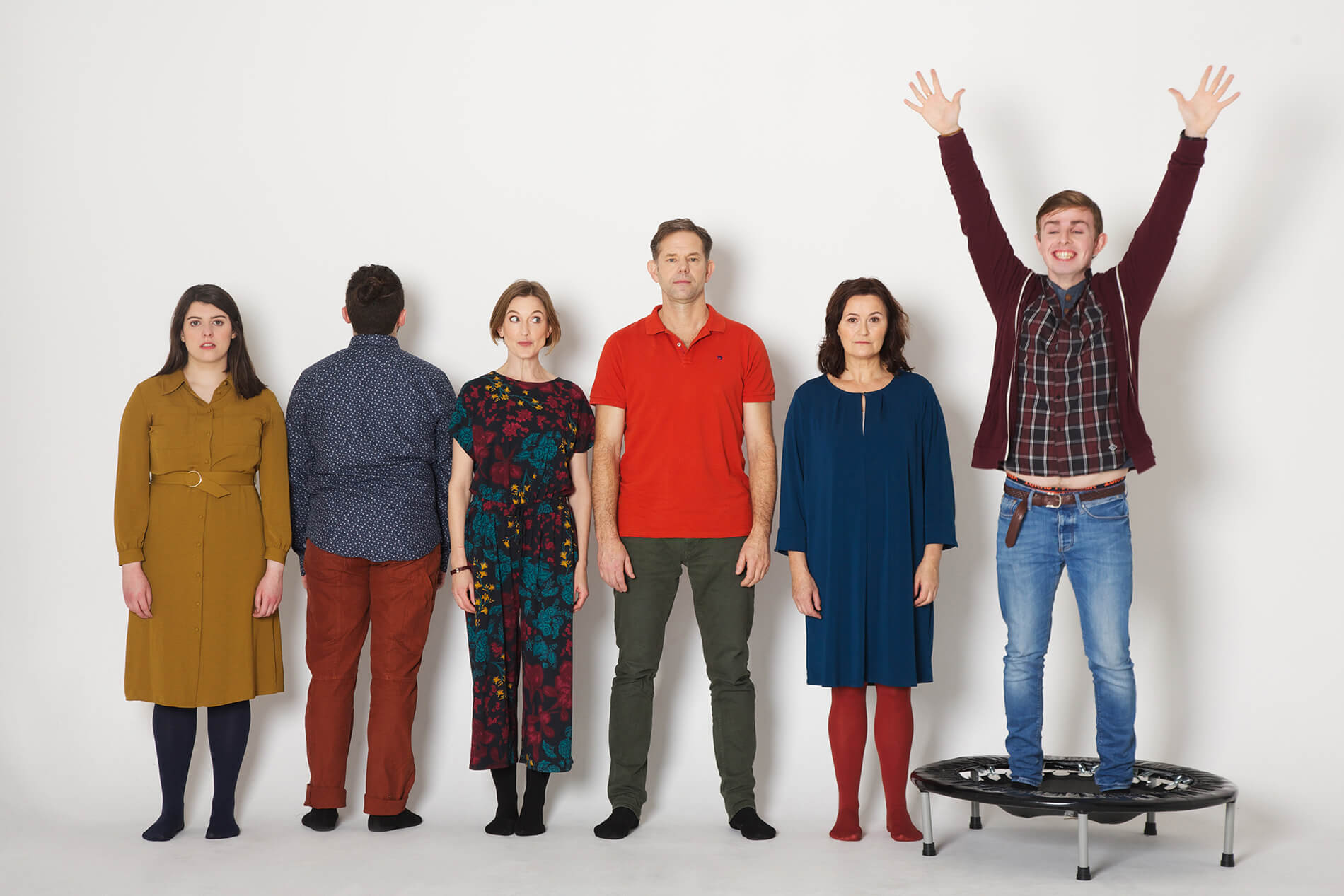 Photo credit: Emily Quinn
Sandra is looking for love. Gordon is seeking acceptance. Simon just needs these parents to be quiet for two minutes so he can get on with teaching their kids.

And Casper? Casper is not here.

What I (Don’t) Know About Autism is a sometimes comic, sometimes heart-breaking look at the world of autism. It uses narrative, song and dance in an exploration of this contentious and often misunderstood subject matter.

Inspired by the writer’s own experience with autism and performed by a cast of autistic and non-autistic actors, the play celebrates autistic identity whilst offering deeper insight and understanding to non-autistic audiences.

All performances include a post-show talkback. 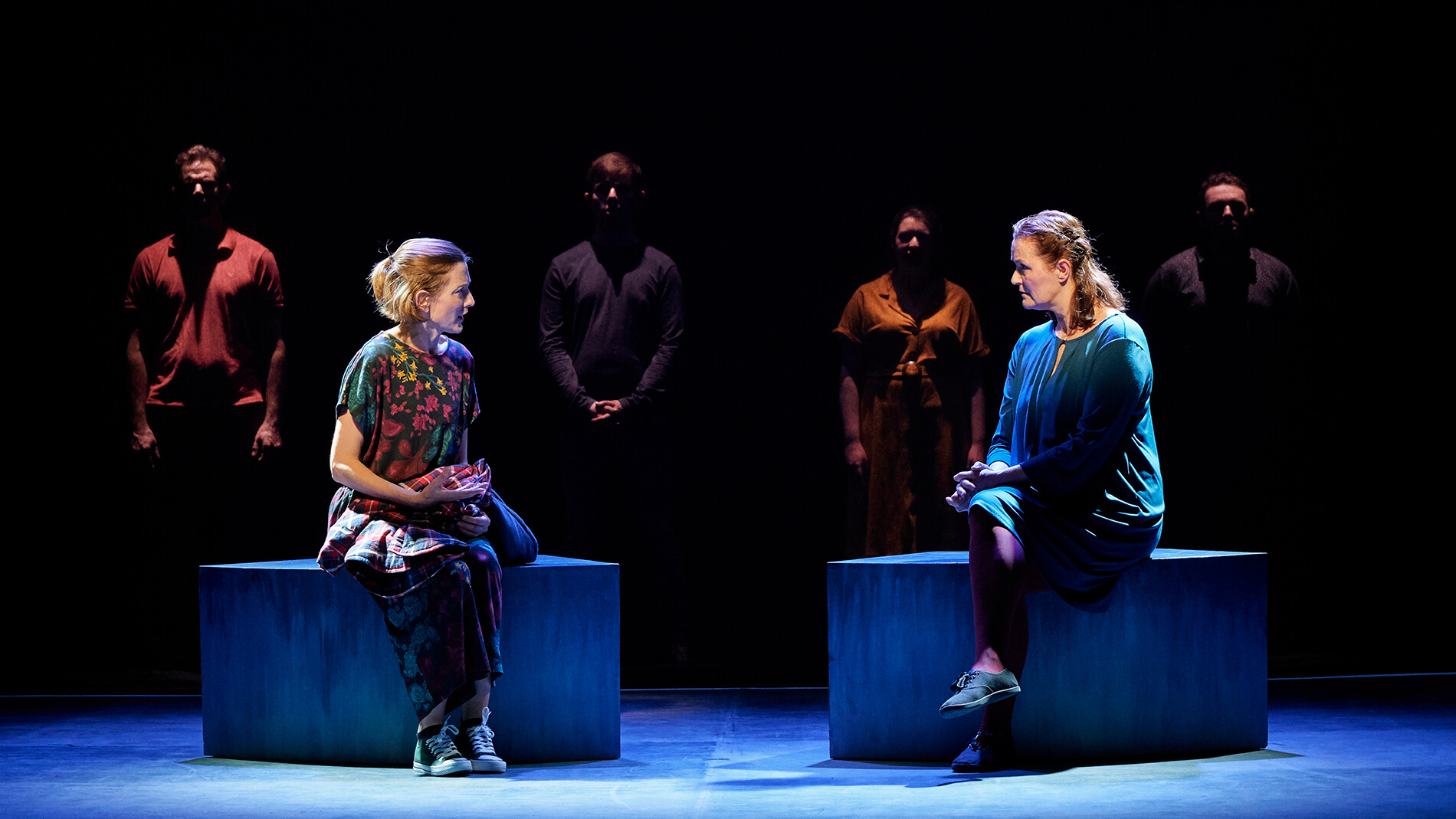 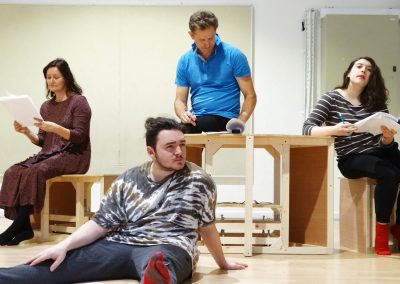 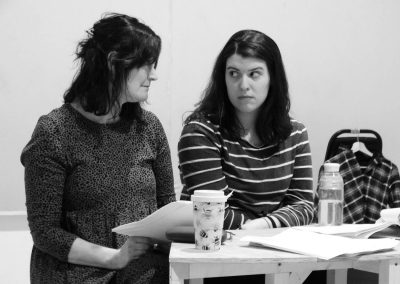 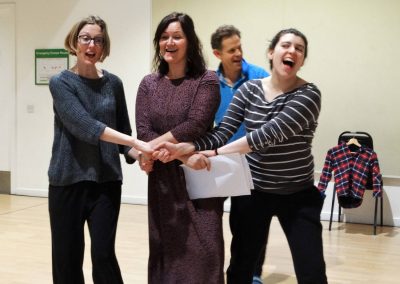 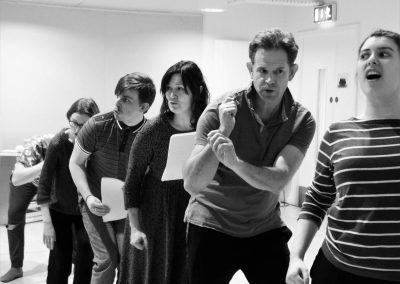 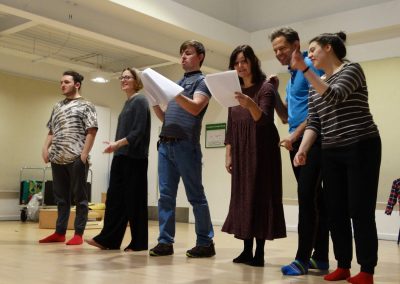 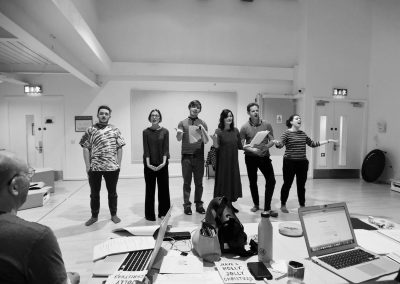 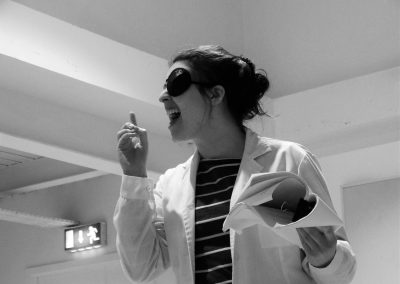 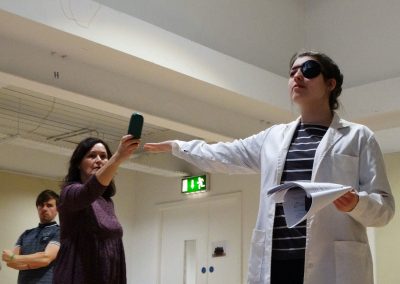 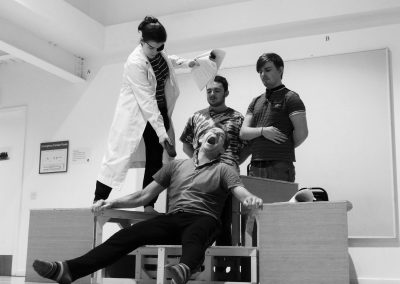 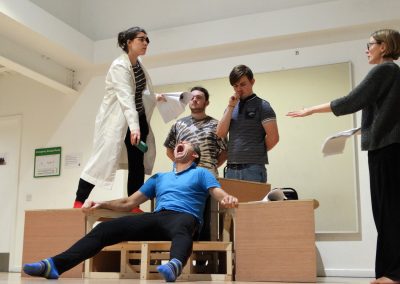 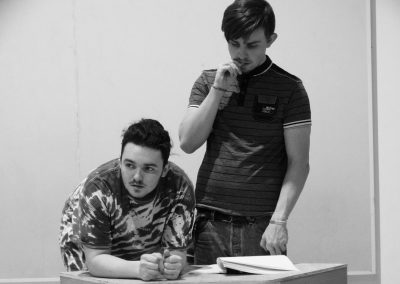 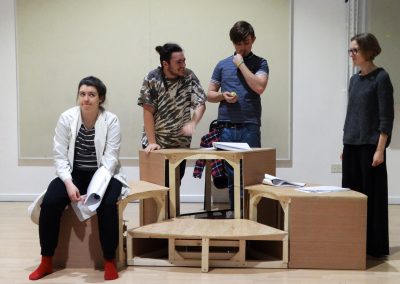 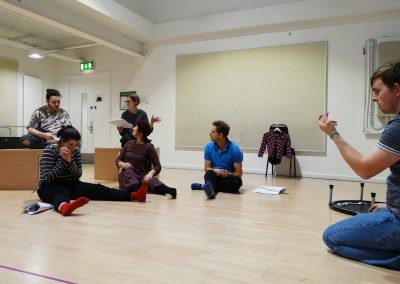 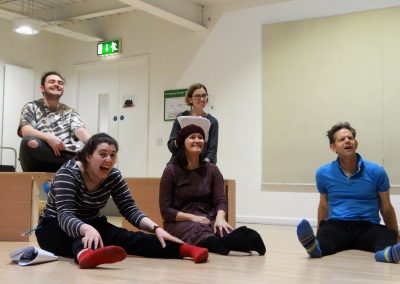 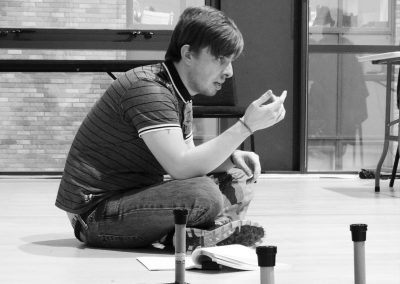 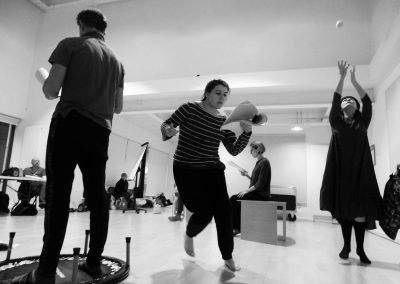 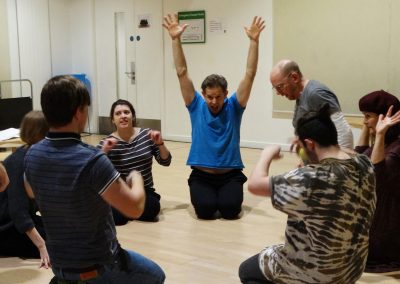 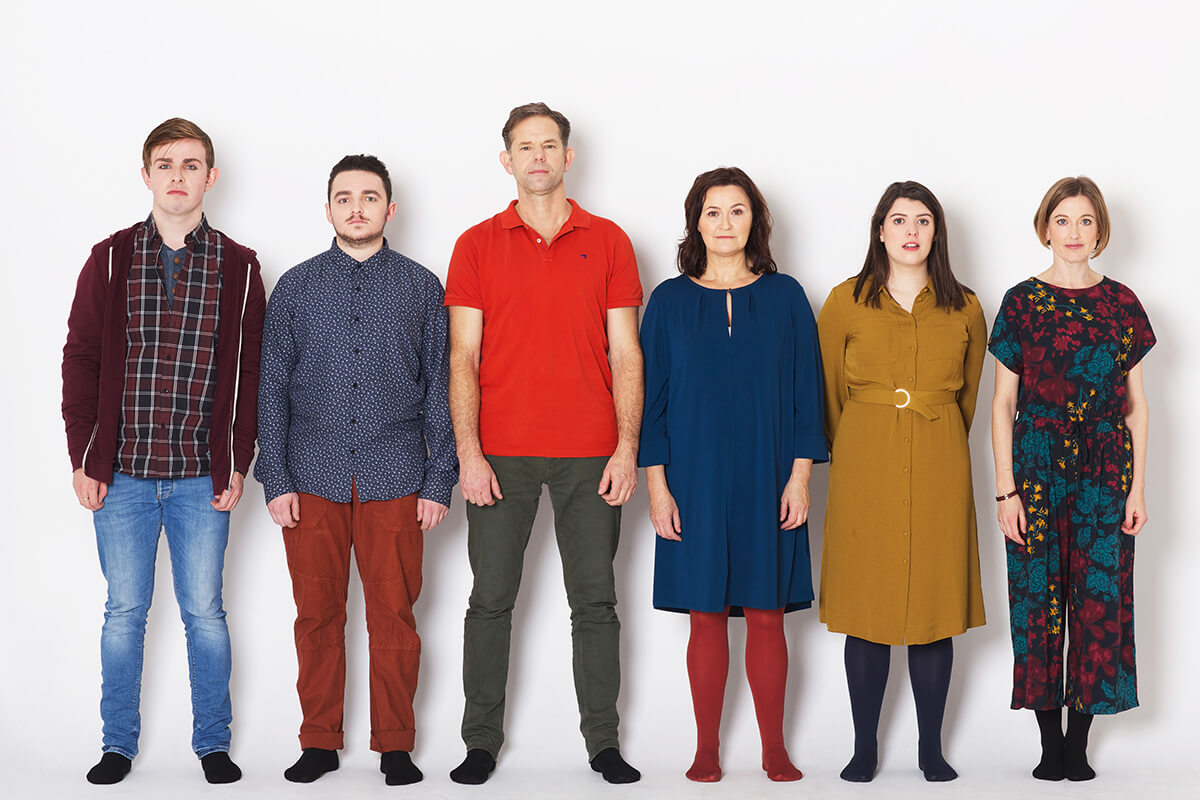 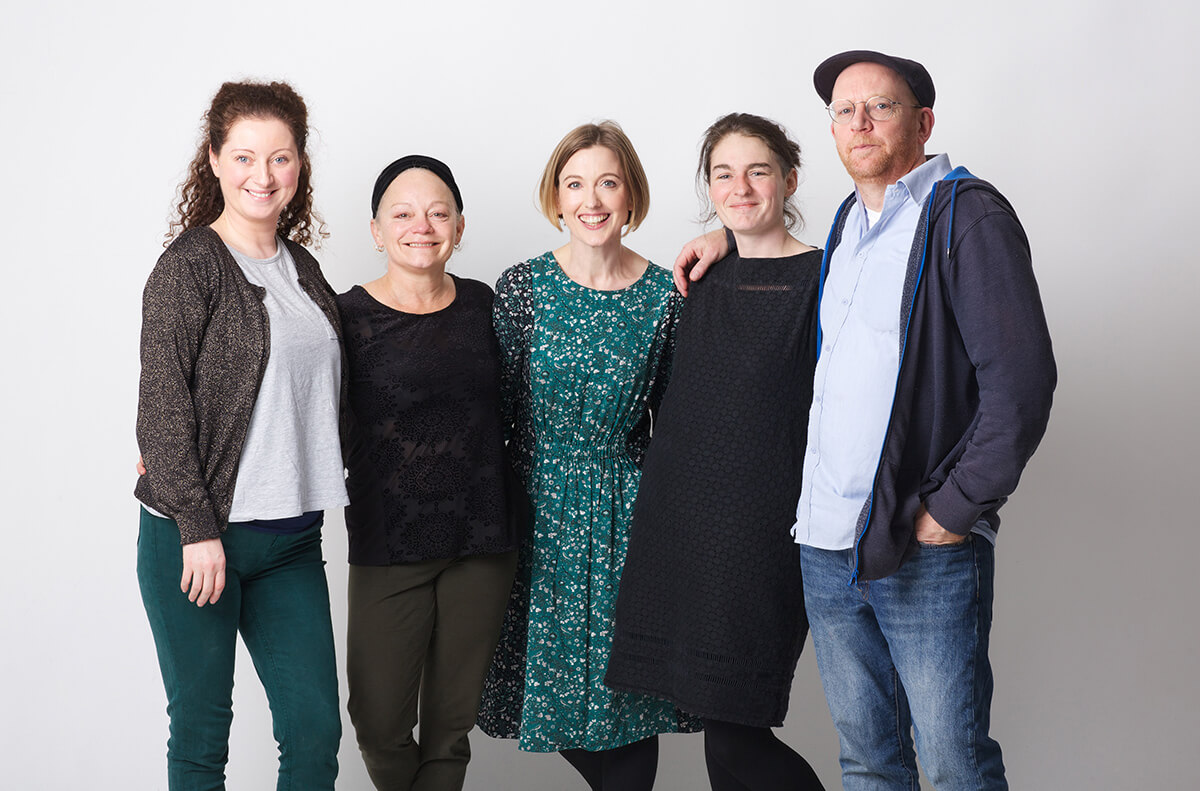 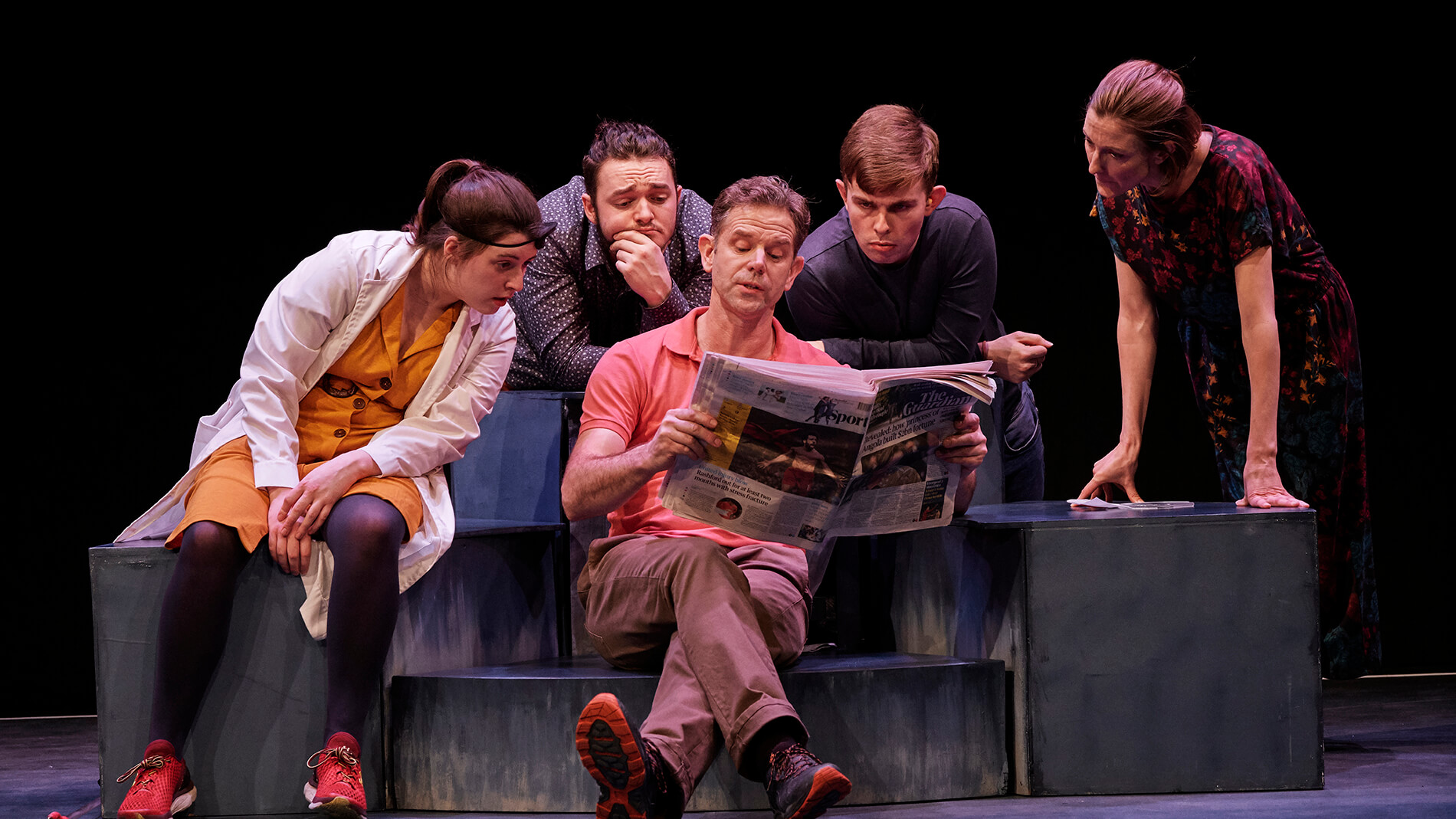 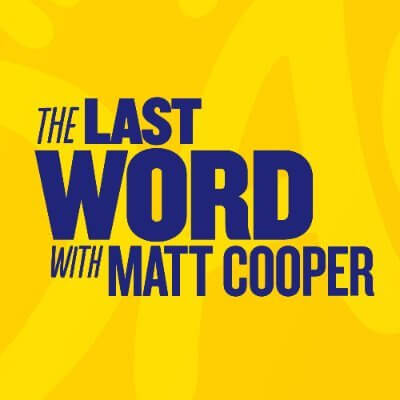 Jody spoke to Matt Cooper on The Last Word to discuss everything she has learned about autism. Listen on the website. 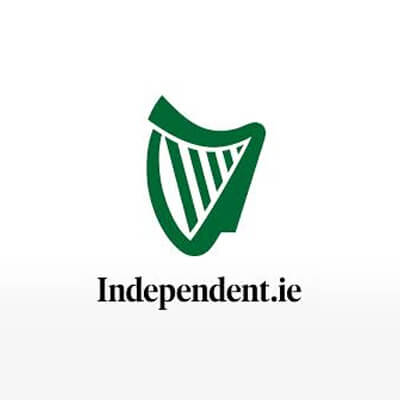 Jody O’Neill: ‘I want to celebrate our autism – not change it’. Read the article.

Playwright and actor Jody O’Neill spoke to Miriam O’Callaghan about her diagnosis of autism and her new play; ‘What I (Don’t) Know About Autism. Listen on the site. 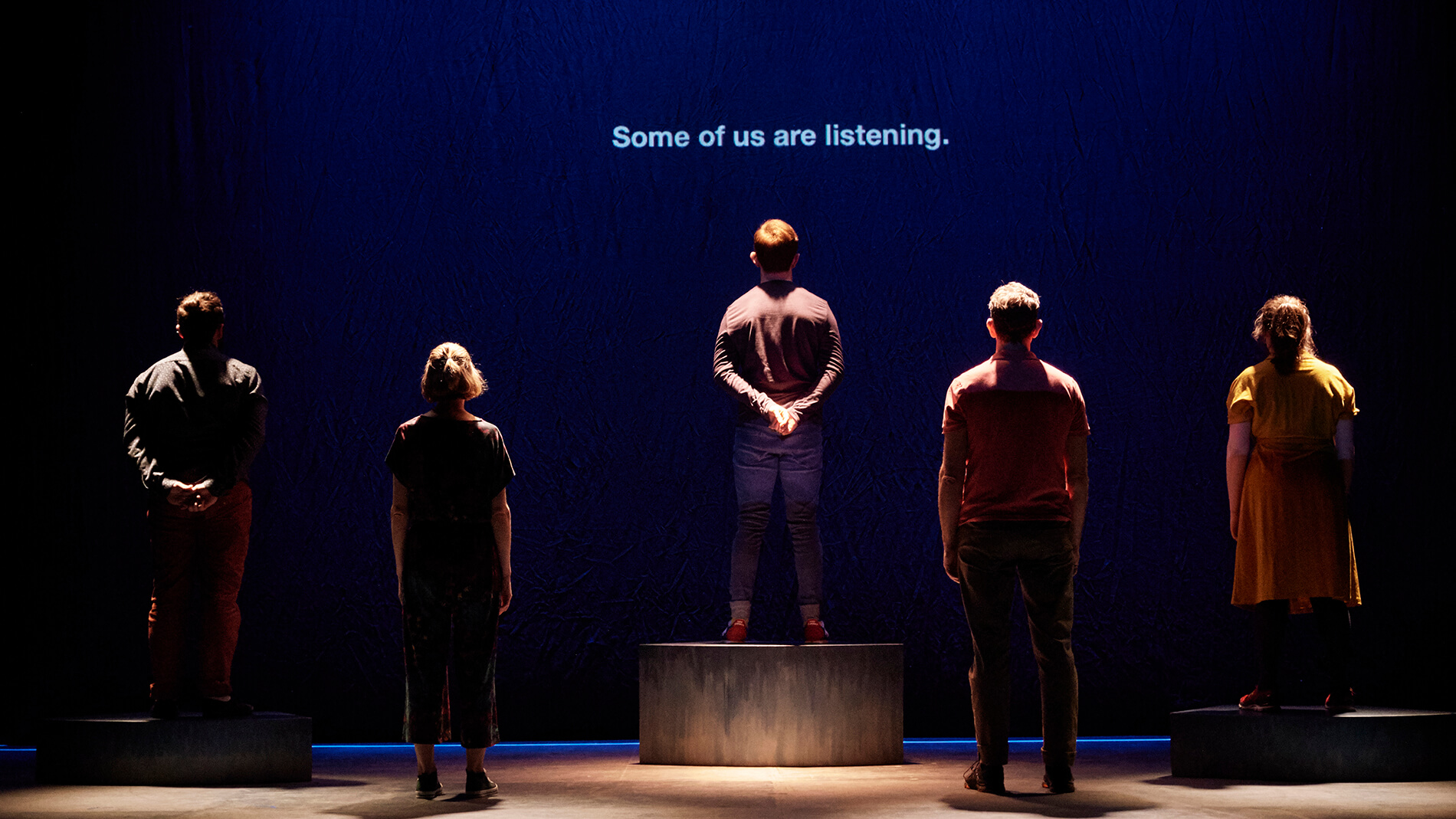 Jody O’Neill is a writer and actor.  She graduated from the Bachelor in Acting Studies, Trinity College in 2003.
She is part of Rough Magic’s ADVANCE programme and is researching and developing making work that promotes Autism acceptance.

Working with Draíocht and Blakestown Adult Day Centre, Jody recently developed a new work, Saying the Words, that was performed on Culture Night 2019 as part of Draíocht’s ‘Our Place Our Stories’.

In 2019, Jody was awarded a Judges’ Commendation at the Bruntwood Awards (Europe’s biggest playwriting prize), she was shortlisted for the PJ O’Connor Award, and was one of the six final playwrights shortlisted for Fishamble’s A Play for Ireland. Her play Eating the City was selected to be part of The New Theatre’s 2019 Path to the Stage New Writing Week.

Trained as an Actor and holds a Master’s Degree in Performance Drama from University College Dublin.

She co-founded Mouth on Fire Theatre Company with Cathal Quinn (Head of Voice, The Lir, Trinity College), specialising in the work of Samuel Beckett. Productions include five world premieres (Irish language) with international tours to the UK, Russia, Spain, Japan and India. The company received three international awards at the Russian Kot Bayun Literary Festival and has represented Ireland at the Hyderabad Literary Festival, India. Most recently she produced Samuel Beckett’s All That Fall for President Michael D. Higgins to celebrate Culture Night 2019 at Áras an Uachtaráin.

Melissa is co-partner of Speckintime Theatre Company with Matthew Ralli, which was founded in 2014. The company was awarded writing commissions for the Visitor Audio Guide Experience at Dublin Castle, Historical Monologues for Culture Night/Dublin Castle and most recently for the centenary of Dáil Éireann, Dáil100 at Leinster House.

Theatre credits include The Harvest by Jane Mc Carthy, directed by Matthew Ralli (The New Theatre), Yeats Besotted by Cathal Quinn (Bewley’s Theatre). I have performed twelve Samuel Beckett plays for Mouth on Fire; All That Fall, Footfalls, Rockaby, Come and Go, Play, Catastrophe, Not I, Rough for Radio II, and a further four, which were world premieres; Rocabaí, Matalang, Cén Rud Cén Áit, Teacht Is Imeacht (Irish Language, translated by Gabriel Rosenstock).

As co-founder and co-director of leading Irish theatre company Asylum Productions, Donal works extensively in the development and presentation of new Irish writing and in the pioneering of new forms of theatre. “Quirky, idiosyncratic and original … A unique brand of theatrical magic… the experience of watching an Asylum show is unmistakeable… something always surprises.” The Sunday Times

Other directing credits for Asylum include:
The Chronicles of Oggle by Peter Gowen (“**** …pure gold…” Sunday Business Post) which returns to Smock Alley and the Everyman, Cork in May of this year;

Cindy Cummings is a dance artist (choreographer/performer/tutor) whose practice integrates dance, theatre and live art. Since 1986 she has created collaborative works with dance, theatre, visual, sound, literary and media artists around the world for live performance, installation and film. Based in Co Kilkenny, she works as in house choreographer at KCat, a multi-disciplinary Arts Centre in Callan, dedicated to the fostering and nurturing of creative ambition and professional development in the arts.

Recent productions include: The Big Chapel X (Asylum Productions in association with the Abbey Theatre), The Water Boys and POWER: We All Come From Somewhere (Equinox Theatre Co). Currently she is in the R&D stage of creating a solo work to premiere in 2021. Since 2007, Cindy has been a member of Aosdána, the Irish association of artists.

Medb Lambert is a theatre artist based in Co. Kilkenny, with extensive experience as a designer. and producer. As Artistic Coordinator of Equinox Theatre Company at KCAT Arts Centre in Callan, Medb’s work is at the forefront of international best practice in Inclusive Arts.

Recent producing and directing credits for the company include The M House at the Lyric in Belfast (as part of Bounce! Festival), and The Dublin Theatre Festival. She is also producing and designing their current production We All Come From Somewhere a Creative Europe international co-production.

As Co-Artistic Director of Asylum Productions, her work has been presented nationally and internationally, including The Big Chapel X (with Kilkenny Arts Festival and the Abbey Theatre – Best Production, Best Ensemble Irish Times Theatre Awards shortlist), which she co-adapted and designed.

She also produced an international tour for the award winning Circo Islu by Catalan company McBride and Sons.

Eoin has been working as a freelance designer since graduating from University College Cork in 2008.

To get in touch or see more of his work, visit his website eoinwinning.com

Shannon Cowan is an ICFE trained Technician and Stage manager – she is currently the Technical Production Manager of The New theatre.

Shay Croke has been exploring the arts since he joined KCAT Arts Centre in Callan, Co. Kilkenny in 2015. Since then he has explored drawing, painting, sculpture, animation and illustration. He trained on KCAT’s acting course from 2016 – 2018 performing Mephistophales in their production The Doctor Faustus Experiment (after Marlow).

At the moment his particular interest lies in creating Emoji-Dudes with removeable accessories. Shay is an ambassador for KCAT and workshop facilitator.

I am an actor who has performed in various stage plays in Scotland, Spain, England and Ireland such as Actors Anonymous and One Flew Over the Cuckoos Nest. I completed a 3 year scholarship for Shakespeare at the Tobacco Factory in Bristol.  I have also appeared in several independent short films, as well as doing extra work.  I have also done some production management work and assistant directing. I am incredibly excited to be working on the project, What I (Don’t) Know About Autism, and hope that it serves as an awareness campaign for the general public and other autistic people.  I am excited to be making my professional debut at the National Theatre (Peacock stage).

Eleanor Walsh graduated from DIT Conservatory of Music and Drama with a BA Hons in Drama (Performance), and wrote her undergraduate dissertation on relaxed performance and sensory-friendly theatre. She consults on facilitating relaxed performances, autistic representation, and making theatre more inclusive for autistic and disabled people. Recent performing credits include Veiled for the National Leprechaun Museum, directed by Alice Bellamy. She has also performed as a Storyteller in the National Leprechaun Museum. Eleanor is a graduate of AsIAm’s Youth Leadership Team, a former member of the charity’s Board of Directors, and most recently held the position of Information Officer in the organisation. She is now the National Leprechaun Museum’s Social Engagement Coordinator, and is a member of Disabled Women Ireland.

In 2019 Matthew was commissioned by The Houses of the Oireachtas to write and direct six historically based theatrical pieces in Leicester House as part of Dáil 100 – the centenary celebration of the first Dáil. Other writing credits include a commission by OPW to write and direct Dublin Castle’s inaugural audio guide; a commission to write a collection of historic monologues for Dublin Castle Culture Night; and a further OPW commission to write a new play based on the theft of the Irish crown jewels in 1907. The result, Deeds of Deceit, was staged in the Chapel Royal of Dublin Castle to critical acclaim.

Matthew is the founder and artistic director of Speckintime – a theatre company which specialises in developing and producing new Irish writing. For Speckintime he has directed Dáil 100 by Matthew Ralli – (Leinster House), The Curse of the Button Accordion by Sharon Mannion (National Tour), The Restoration of Hope by Philip St John (The New Theatre), Temptress by Philip St John (The New Theatre/Viking Theatre/Whale Theatre), Deeds of Deceit by Matthew Ralli (Smock Alley), The Art of Wedlock – Five One Act plays (Chancery Lane). His freelance directing credits include: The Signalman (The New Theatre) and The Harvest (National Tour) both by Jane McCarthy for WitchWork Theatre Co.; A Christmas Visit by Stuart Roche (Bohemian Theatre) for Corps Ensemble; The Crown and the Red Cross by Jennifer Laverty & Eilis O’Donnell (Dublin Castle – OPW); Revolver by Seanan McDonnell (Theatre Upstairs) for Sugarcoat Theatre Co.; One is Not Oneself by Gerald Lee (The New Theatre) for Cadence Theatre Co.; and Rhubarb Crumble (Bewley’s Theatre) for Ghost Train Willy.

Matthew also works as a professional Executive and Life Coach. His company In The Round provides specialist coaching for artists in Ireland. For the past three years In The Round has partnered with Kildare County Council Arts Service to provide Coaching Bursary Grants for Kildare based artists.

Site by Frank and Marci